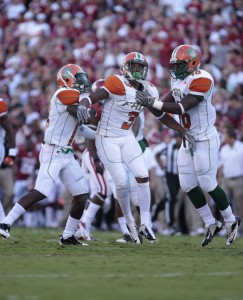 Draft Diamonds Prospect Interview: Devan Roberts, DB, Florida A&M University
How many teams were recruiting you out of high school?
10
Where did you choose and why?
I chose Florida A&M University because the coaching staff made me feel comfortable and ensured that with hard work, I could play as early as a freshman.
What were your goals for your senior year?
My goals for my senior year were to be a leader on and off the field. Becoming more humble and doing what it takes to become a champion again.
Have any scouts met with you, and if so what are they saying?
Multiple scouts conversed with me, and they were telling me to keep playing hard, and keep playing on special teams. They liked my size as well.
At your position, what separates you from the others?
What separates me from others is the determination to do my job and then some. Not just doing what the playbook asks, but also being an athlete and make the special play.
Tell us what you look for when breaking down film?
When breaking down film I look for tendencies such as invert sets, the QB cadence such as the number of times he claps his hands before the ball starts. How the wide receiver comes off of the ball.
Who was the toughest player you have ever faced?
Toughest player I’ve faced was Kenny Stills from Oklahoma University. His routes were smooth and he was very elusive.
If you could compare your play to one person in the NFL who would it be?
I could compare my play to Eric Berry. He’s a hard hitting safety that is a for sure help in the run defense as well as the pass.
What was the biggest obstacle in your life you had to overcome, and how did you overcome it?
The biggest obstacle was when I broke my tibia in my right leg my sophomore year in high school that needed surgery. I overcame it by keeping my faith in God that I could return back to participating in sports, and took advantage of every rehab session so that I could return stronger.
What system fits your style of play the best?
I played in a 3-4 defense in college, but feel like I could fit in just as well in a 4-3.
What is your biggest strength?
Biggest strength is the will to get to the most important thing on the football field which is the ball.
What is your biggest weakness?
I feel like there is always room for improvement in every aspect of the game because you can never become content with your play.
If I were a GM and gave you a second to sell yourself, what would you say?
I am a team first type of player and is willing to go above and beyond to become beneficial to the organization to help you all win games.
Growing up, who was your role model?
Growing up Sean Taylor was my role model. He displayed a killer mentality on the field who was always destined to make plays.
Who was your favorite team and player in the NFL and why?
My favorite team was Steelers because they usually have the reputation of being a solid defense, and has had some legends to play in that 3-4 style defense.
What was the most tragic event that ever happened in your life and how did you overcome it?
The most tragic event was when I was junior in high school, and someone broke into my house and burned it down right before the start of my junior football season. I prayed relentlessly with my family every night while staying at my grandparents’ house. I looked at the football field as a place to relieve any built in frustration from the tragedy as well as to feel free, because I know for at least 2 hours of the day in practice or at games, I was in a place of comfort.
If you were to have dinner with three people dead or alive who would it be?
I would have dinner with Michael Jackson, Michael Jordan, and Deion Sanders due to the simple fact that all three of these men dominated competition and knew what it took to work hard to get to the high level that they were at.
With your first paycheck what would you buy?
I would set aside 10% for the church. Then would I help my grandmother out, get her a car as well as my brother. Try to help the family as much as I can.
Related TopicsDevan RobertsDevan Roberts Florida A&M UniversityFAMU Devan RobertsNFL Draft Devan RobertsNFL Draft Prospect Devan Roberts