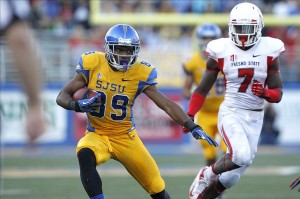 Chandler Jones walked onto the Spartans team as a true freshman and had a terrific five seasons with the team. He is currently the San José State career leader for receptions (248) and touchdown receptions (29) and second in receiving yardage (3,087). He is also the Single-season school record-setter with 15 touchdown catches. Chandler is also one of two players in NCAA history to score a touchdown rushing, receiving and by fumble recovery in the same game in the 2011 Hawai’i win (10/14).  This kid is nicknamed “Jet” for a reason, the 5’9 wide out can burn up the track.  Expect him to be a playmaker at the next level.

I did not have any,  I was a walk on at SJSU

After talking to my mom it just felt like the right fit for me.

To win a conference championship go to another bowl game

Yeah a lot of scouts have they just wanted to get to know me and see the type of person I am. Get a chance to see what I bring to the table.

My knack for getting open and grasping new concepts in the playbook.

Tendencies in different corners and how they play their techniques. Defensive schemes and tendencies as well.

Probably Nevin Lawson out of Utah State physical corner who likes to press. It was a fun matchup.

Probably a mix between DeSean Jackson and Wes Welker.

I haven’t had many big obstacles. But one that comes to mind is starting my career as a walk on and fighting to receive a scholarship by competing for the starting job and playing well in games.

No particular one. I just need to get out on the field and then make plays. Getting a chance to compete and show my stuff.

Route running and getting open.

Not getting enough rest during football season sometimes because I would stay up late watching film or prepping for the game that week.

I never quit. I won’t quit. I didn’t quit coming out of high school when I didn’t receive a scholarship. I went out and earned one. That’s the type of person I am. Always working and trying to get better.

Growing up my role models was my parents and my best friends father who passed away. He was a SWAT officer for the LAPD. They all had big impacts in my life.

I am a fan of the game. I do not really have a favorite team. Growing up I liked the Saints because my dad played for them. When I was younger I liked the Raiders because we had family friends who played for them at the time. So I always liked teams that I had a connection with through people. But my favorite player growing up was Jerry Rice.

My Best Friends father who was the SWAT Officer passed away. That was a tragic event. And I just grew closer with his family and they became a part of my family as well. We all did things together to keep his legacy alive.

Jay Z, Jerry Rice, and Michael Jordan all men who are successful and made a name for themselves.

I wouldn’t want to buy anything honestly. I’m happy with everything I have now. I would want to invest the money to help support my kids in the future.