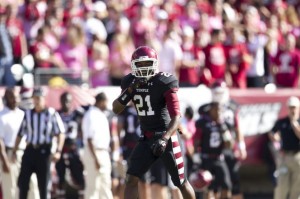 Over 50 schools recruited me in high school, I had 25 offers before I committed to Rutgers University, Penn State, Temple, Maryland, Pitt n Colorado were my top 6.

I chose to go to Rutgers, Im a Jersey guy and they had an excellent recruiting class at the time that was ranked top 10. I ended up being there 1 year before transferring to Temple.

My goals for senior year were to get to a bowl game. and personal goals included 80 tackles, 5 interceptions, 3 forced fumbles, 10 pbu’s.

Playing in the NFLPA bowl game I got the chance to meet with 10-12 scouts from different teams. After watching the practices they loved the energy  and hustle that I gave on every play, and the versatility that I showed playing multiple positions in the game and during my college career.

I think the fact that I played corner most of my career really separates me from my position. Playing corner allowed me to cover on an every down basis so playing safety its relatively easier covering tight ends compared to receivers.

I look at a bunch of things from the split of the receivers, the tendencies in terms of the situations against the down and distance, what plays the team likes to run with what personal in the game or with what formations, the stances of the offensive line whether they’re heavy or light on their fingers and the run pass keys that the offensive line may give away.

Robby Anderson who was my teammate the past 3 years. Gave me the most trouble practicing against him and had a breakout year this year,incredible speed and quickness. Could run a 4.2 if he wanted.

I would have to say Eric Weddle who plays for the Chargers. He’s very versatile whether its lining up in the post, covering a receiver/back/tightend or blitzing. He makes an impact on the game in various ways and is an instinctive player and him along with the likes of Earl Thomas and Tyrann Mathieu are guys who I try to pattern my game after.

Going away to boarding school for 4 years of high school was different. I had to sleep at school and wasn’t able to go home for sometimes months at a time. I was in a different environment than I was not accustomed to being in and I started off with awful grades. Luckily the Dean of the school was also the head football coach so he made sure I stayed on track and kept me out of trouble and I ended up graduating with much better grades than what I started with.

Being that I played under four different defensive coordinators with different schemes I’ve learned to play many types of defenses. The one I feel suits me best though is cover 1. Being in the post and reading the quarterback gives me freedom to roam around and make a play whether it’s in the pass or the run game. You have to have the instincts to get to the ball and I feel like I improved a lot during the course of the season playing this coverage.

My biggest strength as a player is my physicality, Im an aggressive player who likes to make my presence felt while playing against the opponent.

Biggest weakness is playing too high at times, doesn’t allow me to transition quick enough.

I’m an intelligent player that has incredible work ethic and will do anything to help make the team better, whether it’s playing every special teams, certain packages in defense or starting on defense, I’ll be able to contribute in whatever way needed to help the team.

Being that I’m from Trenton, NJ, I would have to say Troy Vincent, with what he did on the football field and what he did off the field giving back to the city, made me want to do the same thing whenever I had the chance to do so.

The 97-98 Broncos we my favorite team growing up, they had a complete team with great players all around and it was the time that I really started to love football. My favorite players had to be both Barry and Deion sanders, the electrifying plays that they made as players were incredible.

Losing 2 friends in the course of a year to gun violence,Just made me more and more thankful for life and made me want to excel in both school and football.

I’d probably buy my 1st car, nothing too fancy, probably a cheap car around $2000 off of craigslist or something