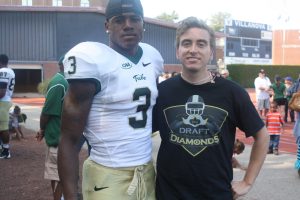 McBride after an impressive performance in a loss to Villanova Oct. 5

McBride had a great game blocking on the 2nd level, which he did often in The Tribe’s rush heavy offense. When Mcbride did run routes, he demonstrated crisp route running, with a second gear in his speed, and gained good separation from the Villanova defensive backs all game. On an outside post route to the front corner of the endzone, the William & Mary quarterback threw a severely under thrown ball, which could have easily been picked off. However, McBride high pointed the ball and fought the it away from the DB for an incompletion. He had a false start called on him at the start of the 2nd quarter, where he prematurely released from the line of scrimmage. Later on, McBride again demonstrated good speed and agility on a post route and made a solid hands catch. McBride also was very elusive on short passes and end-arounds, but had trouble with slipping on his plant foot cutting back. His best catch was a 37 yard reception off of another under thrown pass. McBride high pointed the ball with a full extension leap to grab the ball with his hands.

The McDonough, Georgia native earned 2nd Team All-CAA honors in 2012 as a receiver for his 55 reception, 897 yard, and 10 touchdown campaign. This year, McBride has earned 19 receptions for 336 yards in 5 games, including a 3 reception, 108 yard performance against West Virginia.

McBride is in a tough situation playing in the run dominated William & Mary offense. However, the team does call his number on end arounds and screen passes, so he does have opportunities to demonstrate his great athleticism. Additionally, his quarterbacks do not have the arm strength for The Tribe to use him as a field stretching flanker, which I believe is his most natural position. Be that as it may, McBride shows his physicality and football IQ off the ball in his great run blocking, as well as his ability to find open zones in opposing defenses. McBride is only a Junior, so he has this year, and potentially next year to work on the small stuff to get him ready for the next level. I see McBride as an NFL prospect today. He will test off the charts and has all of the qualities of successful NFL receivers, but his draft stock would greatly benefit from staying for his senior season to qualify for the senior events of the draft process, like his 2012 teammate and Dallas Cowboy 2012 4th round pick, B.W. Webb.